The Plymouth automobile was introduced at Madison Square Garden on July 7, 1928. It was Chrysler Corporation's first entry in the low-priced field previously dominated by Chevrolet and Ford. Plymouths were initially priced higher than the competition, but offered standard features such as internal expanding hydraulic brakes that Ford and Chevrolet did not provide. Plymouths were originally sold exclusively through Chryslerdealerships, offering a low-cost alternative to the upscale Chrysler-brand cars. 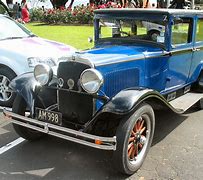